The Spirit of the Lord set Oasis Christian Fellowship a New Assignment .

The word was that he was going to Resurrect Antioch here in  Oasis Lagos ,

“It was to be a Place of  Commissioning, Sending and Returning with a good report “ 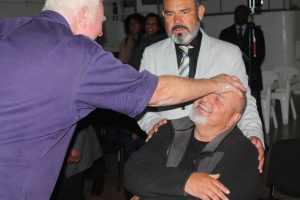 He has already sent people here to be Commissioned and sent out on the Mission field, and they are returning with good reports , They are being sent out under the Grace and Favor of the  Sovereign Lord .

Great Grace , Yes the Empowerment to do impossible exploits in and through our  Lord Jesus Christ .

We believe many more will come to receive His Anointing and be sent out onto the Missions Fields from the A.R.C.  here in Lagos Algarve Portugal.

There are already Missions to Africa, Pakistan, Israel ,  Egypt, and now Turkey .

There is a gathering anointing, a calling of His Saints, a calling to every tribe and tongue.

To be unified in Christ Jesus. We have entered a time of transition into Kingdom building,  He is raising up a new generation  of Kingdom Builders,

(The true Sons of God )  FUSING  us  together with the Spirit of Unity.

He will join the  separate streams together to become a river, the river will swell and  become a flood, and the flood will usher a sea of people into the Kingdom of the Lord.

Lagos is strategically placed at the ” Gateway to Europe “. Henry the Navigator set sail from here to explore the High Seas and new lands , He opened new trade routes ,

We believe there is a new wave coming through this Gateway Nation , a Tsunami of His Spirit  that will touch every nation that borders the Mediterranean sea throughout Southern Europe and North Africa with the Finger  of God pointing towards Jerusalem .   PROPHESY PAGE

The eye of the Lord is on Europe at the South Western Gate , His finger is pointing at the 30/ 45 window,